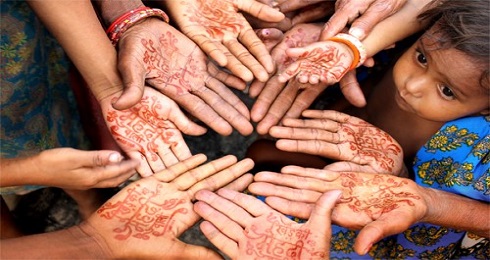 How do you encourage a traditional society to adopt new ways of thinking about family health?

By creating an appealing and recognizable story that shows the value of doing so.

From ‘third daughter’ to empowered woman

Mehendi is the anchor and star of that story – a young woman whose family and life history reflect old and new attitudes towards gender, marriage, sex, and maternal and child health.

From being an inconsequential third daughter in a traditional and poor family that would have liked male children, she becomes an empowered woman in charge of her own life and wellbeing.

The story of a woman who anchors a radio show is told in a 37-part radio series called Khirki Mehendiwali (Mehendi Opens a Window). The format is thus a show-within-a-show, starring a woman who believes deeply that empowered women help create a strong community, and encouraging her listeners to aspire to shaping their own destiny. Mehendi anchors each episode which is an assortment of different elements – music, humour, narrative, characters and health information. The drama section tells her story from birth to adulthood.

Khirki Mehendiwali presents a set of familiar problems and suggests ways to get around them. The bullying mother-in-law, the wicked moneylender, and village politics are all successfully negotiated by Mehendi. Mehendi’s uncle advocates equal gender and family relationships, and loving respect for women and girl children, while his wife, her aunt is her unfailing ally.

With personal grit and the help of supportive family members and frontline health workers, she fights her way to a job as a radio anchor, a relationship between equals, and a healthy and satisfying life.

The show delivers information through an entertaining and engaging human story sprinkled with jokes and songs. It also encourages further discussion about health through listeners’ groups.

Khirki Mehendiwali was originally broadcast on All India Radio in 2012 and 2013 (in three districts in Bihar and one in Uttar Pradesh) for fifteen minutes, three times a week, with an omnibus edition on Sundays.

It was later repurposed for community platforms like Self-Help Groups (SHGs) and Kasturba Gandhi Balika Vidyalaya’s (state-run residential schools for girls from marginalised groups) in Bihar, after assessment results revealed that only 01.2% of the target audience was exposed to the show- suggesting that appointment radio listening was simply non-existent among the target audience. The series went on to be adopted by the government of Madhya Pradesh and introduced to Kasturba Gandhi Balika Vidyalayas across the state, funded by the UK Department for International Development.[see section on scale]