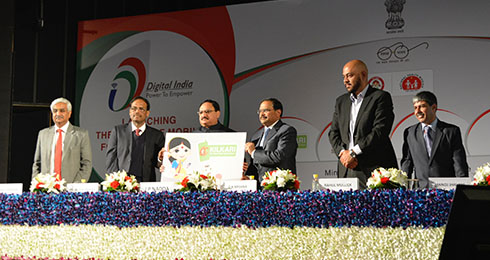 Two of the mHealth services – Mobile Academy and Kilkari – designed and developed by BBC Media Action in Bihar in 2012-2013, under the Shaping Demand and Practices (SDP) project were selected in 2014 by the Government of India (GoI) for national rollout, with the aim of reaching millions of pregnant women, mothers and health workers.

In January 2016, Kilkari and Mobile Academy were launched and scaled up by the GoI as part of its Digital India initiative. Partnership between BBC Media Action and the GoI for the national roll-out of both mHealth services was supported by an alliance of donors (The Bill and Melinda Gates Foundation, USAID and BARR Foundation). The government agreed to cover the cost of the data-centre to host the services, telecommunications connectivity to the national platform and Toll-Free calls pan-India; a commitment translating into millions of dollars-worth of investment as the services were progressively rolled out across the country.

The two complementary mHealth services were designed to provide accessible Reproductive, Maternal, Neonatal and Child Health information to frontline health workers (FLWs), new and expecting mothers and their families and improve the uptake of priority health behaviours, with a view to increasing the adoption of life-saving preventative maternal and child health behaviours by rural families.

The national rollout of these two mHealth services is pioneering not only in the massive scale it reached but also in its efforts to sustain public-private partnerships. The Indian government has covered all call costs since the scale up began, making the services free to millions of families and hundreds of thousands of health care workers. It also funded the data centre and telecommunications connectivity costs, as well as, taking responsibility for rolling out the services across India, with support from BBC Media Action. As of 31st March 2019, the services have transitioned in full to the GoI.