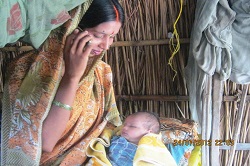 Kilkari was first launched in Bihar in 2013. It has been a six-year journey from research and development to the adoption of Kilkari by the national government. The service is now operational in five languages and 13 states, including Bihar. Today, Kilkari is the largest maternal messaging service in the world. Since the national scale up of Kilkari, in partnership with the Government of India, began in January 2016 over 9.9 million subscribers have been reached and more than 210 million minutes of content listened to. No other maternal mobile messaging programmes in the world has managed to persuade a national government to cover telecommunications costs. Most other maternal messaging programmes are dependent on donor grants to cover telecommunications costs.

When BBC Media Action first launched Kilkari in Bihar, it aimed to achieve both scale and sustainability. As a result, Kilkari was designed as a cross operator service, with a standard Value-added service (VAS) revenue share business model. Any pregnant woman and mother in the state of Bihar could subscribe to Kilkari, thanks to BBC Media Action’s partnership with the six largest Mobile Network Operators (MNOs) in India. The service was billed to the consumer, to try and generate sufficient revenue to cover Kilkari’s ongoing running costs. At the same time, all MNOs agreed to reduce the standard, commercial IVR VAS tariff from INR 6 (USD 0.09) per minute to INR 50 paise (USD 0.007) per minute. This change in pricing allowed the base of the pyramid to afford Kilkari. Non the less, cost remained a significant barrier to women’s usage of the service.

Government adoption under the national scale up allowed Kilkari to be free of cost to all pregnant women or new mothers registered in the public health data base. The Ministry of Health and Family Welfare (MoHFW) directly covers all call costs via a contract with one of India’s largest private MNOs. Today, any mother, on any mobile phone network can take advantage of the service thanks to standard interconnect agreements between MNOs in India.

Furthermore, the open source rules engine and profile management system that powers Kilkari and Mobile Academy, MOTECH, is integrated with the MoHFW databases, which track and register most pregnancies and births in India and store contact details of FLWs in every state. Thanks to this integration, women are subscribed to Kilkari when they register their pregnancies or births at public health centers. No expensive rural marketing campaigns or separate subscriptions processes are required. Once MOTECH receives information about a new or expecting mother from Mother & Child Health Tracking System (MCTS) or Reproductive and Child Health (RCH), it automatically generates a schedule of outbound calls for each woman, based on her last menstrual period or the child’s data of birth. This means she does not have to navigate complex IVR trees to receive up to 72 messages on 11 priority health behaviors at the right time.