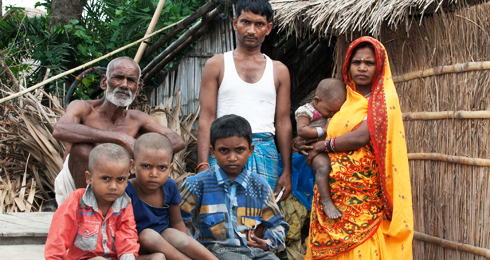 Having completed the Immerse stage in Bihar and having received the results of qualitative and quantitative landscaping studies, multidisciplinary project teams came together to define the challenges that they had observed, and to “mine” data for insights into how social and behaviour change could be achieved.

The first challenge identified was the difficulty in accessing new and expectant mothers – the primary group the project was trying to reach. We found that health communication interventions designed to reach these women were mediated by key gatekeeper figures – husbands and mothers-in-law.

A second challenge identified was younger women’s lack of agency. Young mothers reported that they felt under pressure to continue having children until at least two boys were born, as this was what their husbands, mothers-in-law, joint families and society at large expected. Modern contraceptive methods were mistrusted as potentially harmful to fertility if more male children were required. Pregnant women reported that they had no say in where they gave birth – a decision usually made by their mother-in-law.

The third challenge defined was the powerful web of social norms and religious traditions that regarded women’s bodies as impure and inadequate. This led to behaviours such as discarding the “impure” first milk (colostrum), washing the baby to remove the “polluted” coating from the womb and putting “medicine” on the umbilical cord to heal it.

BBC Media Action also identified that many men felt overwhelmed by their large, dependent families and, despite opposition from older family members, were open to change – particularly on the basis of financial benefit.

Frontline health workers (FLWs) were strongly identified as potential change agents with socially sanctioned access to new and expectant mothers. Finally, mobile phone technology was identified as a channel with a high level of penetration across gender and economic divides.