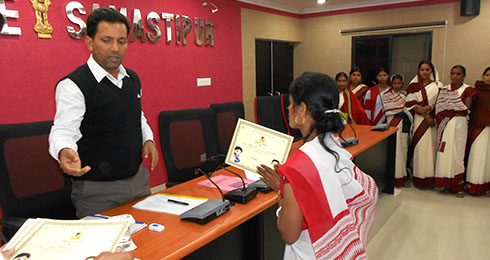 As one member of the BBC Media Action team phrased it “government ownership transformed implementation”.

Indeed, supportive government partnerships were a critical success factor throughout the lifetime of the SDP project. In the case of Bihar, the state government marshalled its own resources to ensure extensive reach for the communication activities and outputs. It also encouraged frontline health workers (FLWs) to support all aspects of SDP, paid for rounds of rural activation, took over the lead on FLW communication training, scaled up Mobile Kunji, and rolled out interpersonal communication tools across the state.

How this was achieved?

Within the SDP project, a structured process was used to co-develop outputs with government counterparts. This involved drawing up technical and creative briefs for each output, followed by production, pre-testing and re-design if necessary. This approach provided opportunities for interaction and collaboration with government at many stages.

Moreover, rather than relying on national or international technical guidelines, state government input was always incorporated in the technical briefs underpinning output design.

This close collaboration created a sense of ownership within government and ultimately supported the transition of the project’s products and services to the government. Designing tools that were adaptable also helped promote sustainability, because government health priorities evolved.

For example, new audio content can be added to the Mobile Kunji, Kilkari and Mobile Academy IVR platforms and to the ‘GupShup Potli’ service. The fact that the Mobile Kunji decks are held together with an expandable metal ring means that new cards can be added as necessary.

By the end of 2015, communication training for FLWs – initially implemented by BBC Media Action and Pathfinder International – was handed over to more than 600 supervisors employed by the government of Bihar. This process enhanced government capacity to provide communication mentoring and support without depending on external trainers or resources.

Our mHealth services- Mobile Kunji and Mobile Academy – were launched in collaboration with the State Health Society Bihar (SHSB), under the National Health Mission (NHM), the Ministry of Health and Family Welfare (MoHFW) and the Integrated Child Development Services (ICDS) (under the Ministry of Women and Child Development). Between the two departments, INR 116 million ($1.65 million) was invested/committed to scale up these services for FLWs, along with the suite of Village Health and Sanitation Days (VHSND) tools, thereby ensuring these tools were firmly embedded in the state’s public health system.

The national roll-out of Kilkari and Mobile Academy represent the most successful model of public sector partnership and reveal the advantages and potential of embedding services in government systems, both in terms of sustainability and reach.

As the current outreach figures for Kilkari and Mobile Academy demonstrate, the services have already achieved an unprecedented level of scale and sustainability, providing distance learning for FLWs and delivering free reproductive, maternal, neonatal and child health education to millions of families across thirteen states.

Public sector partnerships, with state and national government have facilitated the interoperability of the project. Proven integration with the government’s national databases that track and register most pregnancies and births in India has enabled the services to reach scale with almost no marketing investment. Partnering, firstly with state government and then with national government, from inception, to going live, to operations at scale, ensured government ownership from the start and enabled the services to be totally free of cost to subscribers.

When the government decided to adopt Kilkari and Mobile Academy, BBC Media Action’s donors committed to funding content development and technical and programmatic support for three years from launch. The government agreed to take full responsibility for both mHealth services after this period. Further, the government plans to roll out both services in eight more states in the next three years.