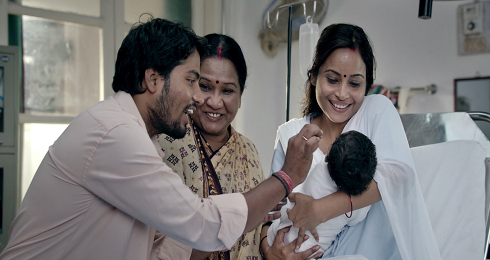 As part of our mass-media strategy, TV advertisements were created around these ideas, with the intention of wide-spread viewership across the state. The 360-degree strategy also included their extension to other platforms like street theatre, rural activation, mHealth tools, radio, Village Health and Sanitation Day (VHSND) tools etc. The idea to diversify the platforms took shape during the development of the SDP proposal, in acknowledgement of the fact that the limited reach of mass media platforms and cost/ budget availability would be a likely constraint to scaling up mass media activities in Bihar.

We used a bespoke strategic planning process called ‘SPARK’ where micro and macro contexts, barriers, and key triggers are mapped to each other in order to attain key insight that then helps generate a big idea. Audiences were at the center of this process and in order to mine insights and generate ideas, it was critical for us to know what people knew, thought, felt, did and needed. The target audiences for these campaigns were couples with 0 to 1 parity, for birth spacing, and the family unit – husband, wife and mother-in-law – for birth preparedness.

Although 4.16 million people in Bihar watched or listened to the television and radio campaign of Ek Teen Do at least three times, and 6.95 million people watched the Char Gaanth TV ad at least three times, analysis of the figures showed very low levels of targeted exposure (i.e. women of reproductive age) to the TV ads. This served to further reveal the limited reach of mass media among our target audience and prompted the decision to intensify the focus on community outreach and interpersonal communication activities. Despite these challenges, SDP succeeded in leveraging INR 325.5 million ($4.65 million) of national government funds to support national level media buying for these three television advertisements.

Mathematica Policy Research found that 12% of women in eight focus districts had been exposed to the SDP project’s TV advertisements. It found that those exposed to the Char Gaanth TV advertisement were significantly more likely to adopt recommended birth preparedness practices that those not exposed (50% compared with 32%). Ek Teen Do and Char Gaanth TV ads were evaluated along with other interventions – street theatre radio programs and rural activation – results of which showed that exposure to these interventions were associated with healthy behavior among mothers with children between six and eight months old.

The key learning here was that despite the limited reach of some individual platforms – mass media in this case – a multi-pronged communication approach should be promoted to ensure maximum reach and exposure, to effect behavioral change.