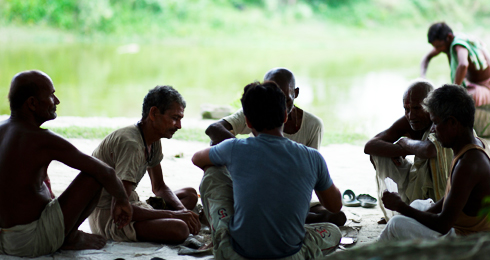 BBC Media Action begins work by immersing teams in an understanding of the people who will engage with a new project. Immersion covers context (social, cultural, economic, political) as well as what people know, think, feel and do, what they need, and who their key influencers are.

In Bihar, the process of immersion took many forms; including desk research, visits to project areas and technical health consultations.

In addition, a number of techniques were used to build empathy with audiences, ranging from ethnographic immersion – where researchers and other staff spend time with different groups, observing, listening and talking – to more traditional research involving in-depth interviews, focus group discussions and large quantitative studies based on door-to-door surveys.

A key objective was to gain a greater understanding of the different barriers to change (such as social norms, religious traditions, economic priorities or class and caste) as well insights into catalysts for change.

Immersion trips to rural Bihar by project teams were particularly important for building an understanding of the experience of poor, rural women – from girlhood through to motherhood – and the corresponding changes in their levels of mobility and agency.

The teams observed and engaged with different groups, from TV-viewing households in peri-urban areas to marginalised communities living in isolated homesteads. They talked to women about what they did, thought and felt about their families; what motivated them to have children; what their role was in making decisions about their pregnancies and the birth of their children; how they cared for their babies and who their key influences were.

They also talked to their husbands, mothers-in-law, and frontline health workers (FLWs)

In this way, the teams gained a greater understanding of village power dynamics, where authority radiates from the centre, occupied by upper-caste Hindus and village leaders, out to marginalized Dalit (oppressed, or lowest caste) communities occupying the fringes of settlements.

They learned about the taboos associated with crossing religious and caste lines, where Hindu health workers rarely visited new and expectant Muslim mothers in their catchment areas and where lower-caste communities were excluded from the public health system.

Access to different forms of communication was also explored.

All of these insights shaped the communication strategies developed in Bihar.