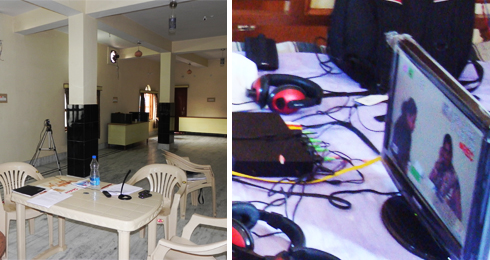 The human-centred design process used by BBC Media Action in Bihar is iterative in nature, often involving returning to the ideation stage multiple times. The objective is to learn quickly about what works and does not work for audiences.

For example, under the Shaping Demand and Practices (SDP) project in Bihar, the communication framework, creative approaches, output user-interfaces and content, were continually refined on the basis of learning from audience testing.

Rapid, repeat engagement with stimuli designed to elicit genuine responses (rather than what the participant thinks you want to hear) was critical, particularly in a context where it is not the norm to express dissent.

In order to help test ideas and draw out the opinions of reticent rural women, and to effectively engage them in the development of communication outputs and activities, BBC Media Action developed the concept of a portable design laboratory, which could be implemented under a mango tree, in a primary healthcare centre or local school. The “lab” consisted of facilitators who spoke the local language and dialect and were trained in the use of ‘discussion guides’ that were developed, translated into lay language, field-tested and fine-tuned, before being operationalized.

A significant investment was made – in terms of staff time – in building the capacity of facilitators and researchers to probe responses to questions to make sure they were fully understood by the audiences. Researchers were also trained to carry out task-based user-testing of digital prototypes, including unaided user engagement and techniques to capture what was not understood by users.

This whole process required BBC Media Action committing to, as one staff member put it, “learn from user tests and research, to redefine problems, to reboot strategy, to redo outputs, to redesign implementation.”

This process also required the humility to recognize that some theoretically great ideas may just not work in the field. This leads on to another important requirement – flexibility from your funder. BBC Media Action found the Bill & Melinda Gates Foundation to be open to considering changes in project activities, rather than being wedded to an immovable log-frame dictating fixed outputs from the project inception.

Having such a comprehensive product development process paid off, according to Debarshi Bhattacharya of the Gates Foundation, who notes that many of BBC Media Action’s successes in Bihar were “rooted in the capacity of the team to have thought it all through completely, all the nuts and bolts. There was a tenacity and a ‘deep-thinking’ approach, reflecting on-the-ground realities about what will and won’t work.”