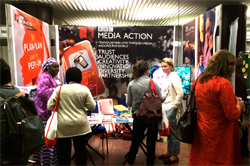 As an independent charity, we are not funded by the BBC license fee.  Our work is made possible with support from our generous donors – governments, foundations, corporations and individuals.

We at BBC Media Action believe that media and communication can be a powerful force for positive social change. Our aim is to inform, connect and empower people around the world.

We use various forms of media and communication, to tackle poverty and contribute to long-term change in some of the world’s poorest places. Our work focuses mainly on governance and rights, health and resilience and humanitarian response.