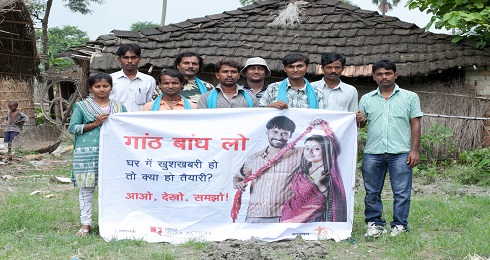 Much of rural Bihar is characterized by strong traditional customs, beliefs and habits, low levels of education and limited access to mainstream media. One of the ways that the Shaping Demand and Practices (SDP) project reached people in rural Bihar with family health communication was through street theatre.

In low-literacy societies, street performance is a much-loved traditional way of providing entertainment, information, and, in the best case scenario, changing behaviour. SDP used this familiar, time-tested strategy to deliver a new message.

We developed three rounds of street theatre which focused on birth preparedness, family planning and then child nutrition. These were extensions of the TV ads – Chaar Ganth on birth preparedness, Ek Teen Do on family planning and Petpuja on child nutrition. In this way we sought to demonstrate the power of one big media agnostic idea and how it could be replicated across multiple touch points.

Birth preparedness (Char Gaanth): A simple six-character street play called Chaar Gaanth, or Four Knots, was built around a mnemonic to aid retention of key points about preparing for the birth of a baby. Each knot served as a reminder of one important thing to do during pregnancy: register the pregnancy, save money for delivery expenses, identify an institution for delivery and arrange transport there when it was time to deliver. This idea was an extension of the TV ad on birth preparedness – Char Gaanth.

Nutrition (Petpuja): In the second round of the street play Petpuja (stomach worship), the same six characters were used, but this time with a mission to hunt down a hidden treasure which led them to discover that the treasure they were seeking was the proper diet and nutrition for children above the age of six. This play answered some basic questions on complementary feeding including; when should a child transition from mother’s milk to solid food? What should the child be fed and what consistency should the food be?

Family Planning (Fayde ka mantar): The third round of street theatre used the same six characters, but here the focus was on men, who were told about the Fayede ka Mantar (mantra of benefit) which was key to them becoming Baap No. 1 (Top Dad). The fayde ka mantar (mantra of benefit), called Ek Teen Do, encouraged parents to maintain a gap of three years between two children and educated them about spacing methods. This round of street theatre was also linked to the promotion of the mHealth service, Kilkari

The SDP project found that devices typically associated with mass media – such as, the use of consistent characters, serialized storytelling, cliff hangers and audio-visual material – could provide engaging stimuli for audience engagement across communication platforms. We recognized the power of an appealing and recognizable story/ drama in triggering discussions on health practices in a society that apparently took family health for granted. In doing so, we leveraged street theatre – a traditionally popular platform and strategically organized performances near the periphery of villages where the most marginalized people, with the least access to media, lived. We innovated the show format with interactive quizzes to enhance audience engagement and inspire conversation.

We partnered with Banglanatak.com to implement 10,000 street theatre shows in three rounds, across eight priority districts. However, rather than spread the 10,000 shows across 10,000 villages, we took the strategic decision to prioritize frequency over reach, and so decided that all three rounds of street theatre would go back to the same 3,333 villages, giving people an opportunity to engage with the street theatre over and over again.