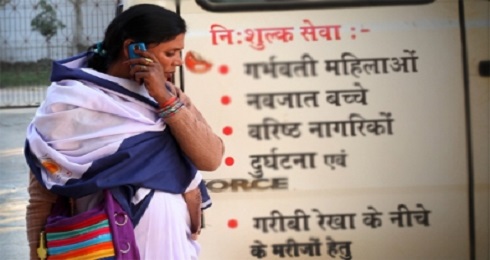 In Bihar, as in other states in India, frontline health workers (FLWs) are committed to reducing maternal and child mortality rates. However, data from 2011 landscaping study indicates that most health workers were neither highly educated nor well off. Their abilities were limited by remoteness from centres of learning, and educational and financial status. Their time was limited by family obligations. What option, then, was available to a health worker who was keen to further develop her knowledge and skills?

Could we create an academy that could train 200,000 FLWs at the same time? Where content was standardised and trainers unnecessary? An academy that enabled FLWs to complete the course anytime, anywhere, at a fraction of the cost of face-to-face training?

Mobile Academy is our award-winning, IVR-based training course designed to expand FLW’s knowledge of life saving preventative health behaviours, and enhance their communication skills. It uses mobile technology that is handset independent, audio-based and accessed via a simple voice call to train FLWs to deliver life-saving information to millions of families.

The Mobile Academy course is divided into chapters, lessons and quizzes, delivered in the voice of our engaging yet authoritative female doctor character, called Dr Anita. Book marking technology enables users to return to the course where they left off, FLWs receive an accumulative pass/ fail score at the end of the course.

FLWs could take the course as quickly or slowly as they liked. Book marking technology enabled users to return to the course where they left off, making it easy for FLWs to take the course in their own time. If they completed the course with a 50 per cent pass mark, they received a printed certificate from the Government of Bihar.

An FLW could take the course by dialling a short mobile number from any mobile handset. When the service was first launched in Bihar in 2012, it was made available across the state, through agreements with five of the largest mobile operators in India. FLWs were initially required to pay for the 160 minute course themselves – at less than one cent a minute, the total cost was approximately $1.50. None-the-less, cost remained a barrier in the uptake of the course.

Upon adoption by the government of India in 2016 and its launch on the national platform, Mobile Academy was made available free of cost, from any network, to AHSAs registered in the public health database.

In 2016, Mobile Academy was adopted by the Government of India for nationwide scale-up, as part of its Digital India Mission, making it the first national adoption of an mHealth service globally, potentially reaching over 800,000 FLWs. It is now the largest mobile-based training program for FLWs in the world, with over 300,000 users across 13 states in India and more than 200,000 graduates as on Mar 2019.

Impact evaluations of Mobile Academy have shown that those who take the course find it easy and convenient to do so. FLWs said it increases their confidence and their ability to help rural women and children. An impact evaluation of Mobile Academy in Bihar in 2013, indicated that FLWs who had completed the course had better knowledge of preventative behaviours related to maternal and child health. FLWs also reported an enhanced standing in the community and greater levels of trust, even from men.