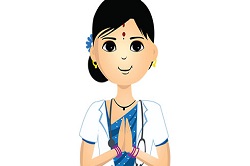 When the government decided to adopt Kilkari and Mobile Academy, BBC Media Action’s donors committed to funding content development and technical and programmatic support for three years from launch in January 2016. The government agreed to take full responsibility for both mHealth services after this period.

In the run up to the transition of the two mHealth services to the Government of India (GoI), the Ministry of Health and Family Welfare (MoHFW) partnered with Armaan – an Indian not-for-profit public health organisation – to take over the running of the mHealth services, including responsibility for updating the content, supporting state governments in rolling the services out in the field, and critically, contracting Beehyv and IMI Mobile – the technical partners responsible for supporting the IVR system and Motech, to help ensure continuity.

A comprehensive knowledge transfer plan and exist strategy was agreed with MoHFW and Armman. BBC Media Action delivered more than 91 hours of face-to-face knowledge transfer sessions to MoHFW and Armman and 148 handover documents detailing every aspect of the programme. Armman then shadowed BBC Media Action for three months. Beehyv and IMI Mobile continue to provide the technical support for the applications. On the 31st of March 2019, the Gates Foundation and BBC Media Action completed their exit from the programmes.

The government has indicated that it plans to roll out both services in eight more states in the next three years.

“We are thrilled that the Ministry of Health and Family Welfare has decided to continue scaling Kilkari and Mobile Academy beyond our exit from the programmes. In the digital development community, where sustainability is often the illusive pot of gold at the end of the rainbow, this feels like a massive achievement.” Priyanka Dutt, Country Director, BBC Media Action.