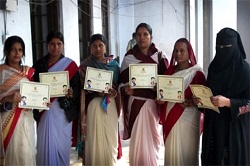 Mobile Academy was first launched in Bihar in 2012, reaching 40,000 ASHAs and Anganwadi workers in 8 districts in six months. It has been a seven-year journey from research and development to the national adoption of Mobile Academy by the government of India in 2016. The service is now operational in four languages, in thirteen states, including Bihar. Today, Mobile Academy is the largest mobile-based training course for frontline health workers (FLWs) in the world. Over 300,000 FLWs registered in the Government of India’s Mother and Child Tracking System (MCTS)/Reproductive and Child Health databases (RCH) have started Mobile Academy, and more than 200,000 FLWs have successfully graduated. In some states, including Haryana, Himachal Pradesh, Jharkhand, Rajasthan and Uttarakhand, more than 50% of all FLWs had completed the course in the first two and half years.

Mobile Academy started off as a subsidised paid service and had thrived in Bihar, with more than 55,000 FLWs paying out of their own pockets to complete the course. When the Ministry of Health and Family Welfare (MoHFW) heard about the scale of Mobile Academy in Bihar from the state government, it recognized that an audio-based approach might be the cost-effective solution it was seeking to provide FLWs with standardised, high quality refresher training on health. In 2016, government adoption under the national scale up allowed Mobile Academy to be free of cost to all FLWs registered in the public health data base. The open source rules engine and profile management system that powers Mobile Academy- MOTECH – is integrated with the MoHFW databases, which store contact details of FLWs in every state. Thanks to this integration, FLWs are automatically registered for Mobile Academy.

MoHFW agreed to cover all call costs via a contract with one of India’s largest private Mobile Network Operators (MNOs). Today, any ASHA on any mobile phone network can take advantage of the service thanks to standard interconnect agreements between MNOs in India. The MoHFW also agreed to finance a data centre to host the services and to roll the services out in the states. And it agreed that its internal monitoring and evaluations teams would finalize the indicators for tracking the impact of the services and contract an independent research agency to conduct evaluation studies. Finally, it agreed to take full responsibility for the project after three years, when donor support came to an end.

BBC Media Action brought together a consortium of donors to support the MoHFW in the scale up – the Gates Foundation, USAID and the Barr Foundation. The Gates Foundation agreed to cover the cost of scaling the software, setting up hosting infrastructure for the initial phase of the project and technical support for the services for three years after launch. At the request of the MoHFW, it also agreed to establish a Programme Management Unit (PMU) to liaise between the project and the Ministry. The PMU proved fundamental to the project’s successful engagement with the MoHFW.

USAID provided match funding to the project. It covered the cost of BBC Media Action’s digital team to lead the design, delivery and support for the end-to-end technology solution. It also funded BBC Media Action’s programme team to support state governments in designing their roll out plans. The funding also covered BBC Media Action monitoring the research, including ongoing analysis of system generated data, which was reported to the MoHFW and each state governments every week and month for more than three years. And USAID funded qualitative research in six states to explore the self-reported impact of Kilkari and Mobile Academy on families and FLWs. The Barr Foundation covered the cost of creating and testing the content for the services in five languages.