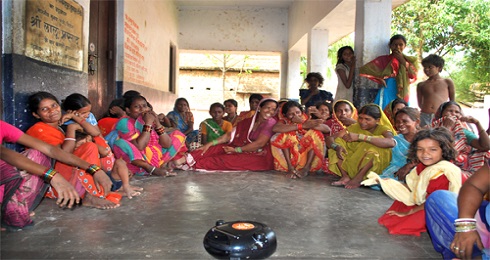 Another strategy used by the Shaping Demand and Practices (SDP) project to tackle the low reach of mass media in Bihar, was to utilise pre-existing self-help groups – that generally met to discuss livelihood and financial issues – as a communication platform. Along with direct interactions with frontline health workers (FLWs), mass media and mobile health services, the listener groups formed a critical component in shaping maternal and childcare health behaviours.

Khirki Mehendiwali (KMW), our 37- part long format radio series, developed as part of the SDP project’s wider mass-media strategy to spread family healthcare messages to reduce maternal and child mortality, was repurposed to be used as an audio stimulus for community platforms such as self-help groups (listeners’ group), due to low listenership among women of reproductive age.

Taped broadcasts of Khirki Mehendhiwali were played to groups of women in pre-existing self-help groups across the state, to generate discussion around family health and normative issues. Each group was provided with a radio CD player and a facilitator was appointed. The facilitator – either a community-level coordinator or a literate member of the group – received training from BBC Media and was paid a small fee in return for their services. They were responsible for mobilizing their group and leading a discussion on the topic covered in each episode of KMW. The listeners were encouraged to clarify anything they didn’t understand and also to express their opinion of the programme and its messages.

BBC Media Action and its partners succeeded in forming 5,600 listeners’ groups across eight priority districts in Bihar. Feedback showed that the women, almost universally, found it helpful, and said they would share what they learnt with their families. Listeners’ groups proved an effective way of ensuring that information and initiatives reached communities in media-dark areas and also ensured greater reach, across caste and economic divides.

The re-versioned format of KMW was also provided to 81 Kasturba Gandhi Balika Vidyalayas – state-run boarding schools for adolescent girls from marginalized communities – in 5 districts of Bihar, in collaboration with the Education Department, Government of Bihar. The Madhya Pradesh state government also adopted and introduced KMW to Kasturba Gandhi Balika Vidyalayas across the state, funding from the UK Department for International Development (DFID).