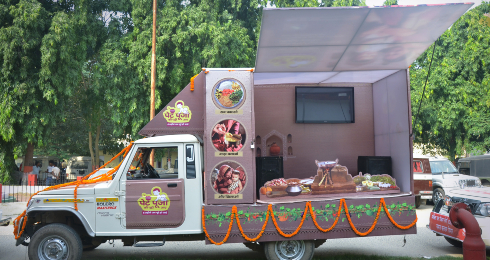 Low reach of mass media, coupled with challenges in leveraging Bihar state government budgets to support the Shaping Demand and Practices (SDP) project’s wider broadcasting plans required an increased focus on community outreach, including rural activation, to reach the most marginalized audiences. The television advertisements on birth spacing (Ek Teen Do), birth preparedness (Chaar Gaanth) and complementary feeding (Petpuja), originally created for broadcast, formed the centre-piece of our rural activation campaigns on each of these themes

Rural activation campaigns are designed for reach and recall. The messages need to reach people who live on the outskirts of society, where there are no roads and minimal access to common resources, including information. They also have to make an impact quickly, be readily understood and remembered, solve logistical problems creatively, and carry as much information as possible, as simply as possible.

Our rural marketing campaigns integrated a central theme and brand across all media, so that Petpuja become synonymous with complementary feeding, Ek Teen Do with family planning and Char Gaanth with birth preparedness. Their design blended skits and audio-visual components. A layered delivery—television, skits and interaction—helped to cement the message in different ways, making the messages ‘stickier’ and helping them spread faster through the community. We collaborated with Anganwadi Workers (AWW) to mobilise target audiences and with the state government for a surround-sound effect and to create social consensus.

An eye-catching van, with posters and music, would arrive in a dusty village, attracting curious onlookers. The team would open the doors, unveiling a small theatrical hub. For instance, for the Petpuja rural activation campaign, the inside of the vehicle was redone to look like a kitchen. The team would then walk around the village handing out information leaflets and inviting people to the show. When enough people had gathered, the van would play the TV commercial. The team members then acted out a little skit, full of banter, to explain the contents of the ad. The skit could also be written for non-actors. At the end they would conduct a friendly quiz, offering prizes for correct answers. This helped to check how much the audience had understood, and also helped to address any misconceptions.

Then the team would fan out on foot, to reach the least reachable people who did not even come to the village square. For such people, the ad and interactive content were loaded on a tablet for use by outreach promoters who would visit the homes of the most marginalized, taking information to their doorsteps. By choosing simple ‘yes/no’ answers to onscreen graphics, family members could go through and fully understand the message of the campaign.

The rural activation for Char Gaanth was conducted in 2013 across 8 innovation districts. Over 800 shows were conducted reaching nearly 100,000 people. Evaluation results indicated that respondents who were exposed to the mobile van activity during the rural activation were found to have significantly higher recall on knowledge regarding birth preparedness i.e. benefits of birth preparedness, registration, and saving money. Significant differences were also found in attitudes, self-efficacy and social norms between those exposed and those not exposed to the mobile van activity.

The rural activation campaign on Petpuja was conducted in 2014 across 15 districts of Bihar. Over 3,000 shows and 18,000 IPC sessions were conducted with the marginalized groups using the tablet, reaching close to 700,000 people. It collaborated with the state government’s Kuposhan Mukt Bihar programme to reduce malnutrition, aligning at all levels from the Secretary to the AWW worker who mobilised the right target audience.