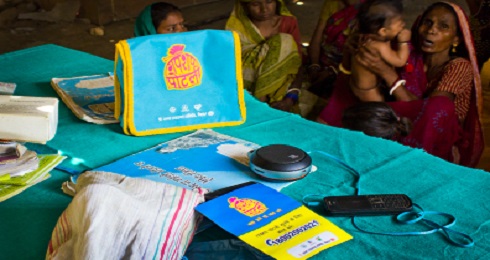 The Village Health Sanitation and Nutrition Day (VHSND) was identified as an important contact point for reaching mothers and caregivers, as well as a way to establish contact with communities excluded from home-based outreach due to social exclusion.The VHSND is a monthly event that serves as a last mile government health outreach programme, conducted by an Auxiliary Nurse Midwife (ANM), where people – mostly women and children – come in large numbers for health check-ups and immunisations.

Could we turn an under-utilised service delivery platform into a vibrant forum for discussion about life-saving information? Could we engage families in conversation while they wait in line for health services? Could we do this without adding to the responsibilities of frontline health workers (FLWs)?

A bagful of chatter

Our research  showed that families would generally come to the VHSND to get their child immunised and then leave. So we created Gupshup Potli (a bagful of chatter), an mHealth service that could be played by FLWs to keep families engaged, by providing them with important health information while they waited.

The service consists of audio capsules and accompanying print materials. FLWs used their mobile phones to access and play pre-recorded audio content to groups of women using small, powerful speakers. The FLW connects her mobile phone to a speaker via an auxiliary cable. She dials a toll-free number to access Gupshup Potli and the speaker broadcasts a health message – for example, a discussion between husbands and wives about family planning – After the play-out, the FLW uses cue cards to help start a discussion and answer questions.

Different normative health messages were broadcast by Gupshup Potli each month at the VHSND. The service aimed to stimulate conversations between mothers-in-law, husbands and other family members, that served as a gateway to large-scale behaviour change, generating further health awareness and reach.

The idea behind Gupshup Potli was to spark family and social conversations, on the understand that group conversation is a powerful way to spread an idea—or a bagful of ideas.

The Shaping Demand and Practices (SDP) programme distributed the required hardware for Gupshup Potli – speakers, cables and various kinds of mobile phone jacks, and also provided training to the FLWs on how to use them. Leveraging simple, pervasive technology like mobile phones and existing infrastructure allowed Gupshup Potli to piggyback on the well-established VHSND platform. For roughly the cost of a disposable syringe, it generated potentially large-scale health awareness, and demand for health services, without affecting the VHSND’s workflow, mandate, and objectives. It was flexibly designed to serve local context, and to accommodate the work division between ANMs, who were custodians of the output, and Agganwari Workers (AWWs), who were also trained to operate the hardware. Gupshup Potli was also aligned with government monitoring and reporting systems in Bihar.

GupShup Potli evolved over time, with the focus of content shifting from social norms related to RMNCH, to content that was linked with specific health services (such as the distribution of oral rehydration solution and iron folic acid tablets) delivered at the VHSND. The technology was also upgraded from providing a single monthly message to on-demand access to a catalogue of content, which enabled FLWs to play the appropriate content to the beneficiary at the right time.

Since its launch in 2014, 4,353 ANMs and 22,368 AWWs across 142 blocks of Bihar have been trained to use Gupshup Potli. By the end of December 2015, GupShup Potli was played at more than 14,000 VHSNDs every month by 69,970 unique users consuming a cumulative content of over 3 million minutes. During this period more than 2.8 million contacts between FLWs and families were made.

Gupshup Potli was shut down in Bihar in June 2017, due to challenges posed by scale up and transitioning the service.