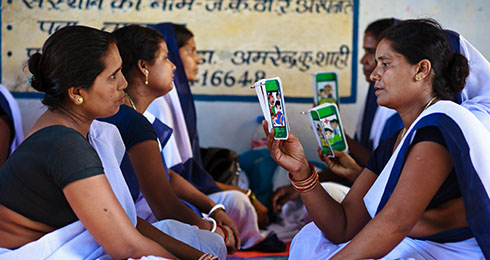 The Shaping Demand and Practices (SDP) project originally assumed home visits to be the primary opportunity for contact between frontline health workers (FLWs) and families. However, research showed that a considerable amount of interaction between FLWs and beneficiaries also took place outside of home visits. Village Health Sanitation and Nutrition Day (VHSND) were identified as an important contact point for reaching mothers and caregivers.

The monthly VHSNDs in Bihar served as a last mile government health outreach programme, where women and children would come in large numbers for health checks and immunisations.  They provided an ideal touchpoint where health information could be shared with women and family members who came for accessing services. As part of the Ananya programme, the strategy, therefore, was to reinvent these events as health communication “hotspots” where women could learn about a wider range of health issues.

To support this approach, a five-step human centered design process was used to develop thematic interpersonal communication (IPC) tools for FLWs, to enable “vivid demonstrations” of information and concepts around products and supplies that were available at VHSNDs. Four sets of products were identified – ORS and zinc for diarrhoea management, short term contraceptives for birth spacing, Iron folic acid (IFA) compliance for pregnant women, and routine immunization. These interactive tools helped to transform VHSNDs from a simple service delivery point to an engaging interface between people and the health system.

The tools were created using bright colours and illustrations, and deliberately stood out from the type of health communication materials that audiences might have seen before.

Diarrhoea doll: We developed a diarrhoea management tool kit to help improve recognition of diarrhoea symptoms and the risks associated with it. The tool used a small inflatable doll to vividly demonstrate how diarrhoea leads to the loss of fluid in the baby’s body and how the treatment protocol of using ORS and zinc works to help manage it.

Family planning: We extended the TV advertisement idea of Ek Teen Do – Fayde ka Mantar (the mantra of benefits) to highlight tangible benefits of birth spacing between two children and promote the adoption of contraception methods. The idea was translated into a visual tool to show how the benefits of spacing grow with each additional year of spacing between births, and a colour-coded card was designed to promote different spacing methods.

Khoon ka Rishta (bloodline) – IFA compliance: One of the challenges for women in poor resource settings is that they rarely have access to technology to understand what happens in their bodies when they are pregnant. In an effort to get women to recognise their roles in the formation of their own babies, through a ‘simple doable action’of taking a pill a-day for 180 days, we developed a tool called Khoon ka Rishta (bloodline). A mother places a red bindi (dot) on the image of the baby for every IFA tablet consumed, helping to visually ‘complete’ the baby.

Suraksha Chakra (Immunization): We developed a tool called Suraksha Chakra (safety net) to communicate the importance of completing every immunization dose for children. The tool works as a vivid demonstration to show how immunization acts as a safety net and that the Surksha Chakra breaks even if a single dose is missed, as this can expose the child to life threatening diseases.

By the end of December 2015, GupShup Potli was played at more than 14,000 VHSNDs every month by 69,970 unique users consuming a cumulative content of over 3 million minutes. During this period more than 2.8 million contacts were made.

Following the launch of the VHSND tools, we conducted a cross-sectional study to determine their effectiveness in shaping the project audiences’ knowledge, attitudes, self-efficacy and behavioral intent/ behaviors. Findings showed significant impact across a range of behaviors:

In 2017, all five tools were introduced as part of the Aarogya Diwas, an initiative conceived by four departments of the Government of Bihar (Health, Social Welfare, Rural Development and SC/ST Welfare), in conjunction with development partners, to collaborate and create a roadmap to improve the efficiency and effectiveness of VHSND sites. The success of these tools resulted in the Government of Bihar committing close to INR 60.7 million (~$950,000) to adopt and scale these VHSND tools across the state.