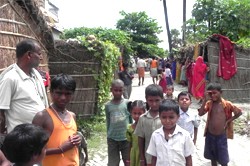 A Mahadalit village in Bihar

What does it mean to be working in Bihar?

We’re talking big. This is a state the area of Hungary. It has a population of 104 million – bigger than Germany and Romania put together. It has big economic gaps: the average per capita income is one-fifth of the rest of India, the infrastructure is poor, and growth rates have only just started to move up.

It has a big rural population—four-fifths of its people live in 45,098 villages. So it is a big place with big challenges.

It has strongly traditional customs, beliefs and habits. Women are primarily seen as child-bearers—preferably bearers of sons. Babies are considered a blessing, regardless of a family’s ability to nurture them.

Health is the lowest priority in a household’s budget, and maternal health lowest of all. So changing mindsets is hard.

Rural Bihar has little or no education and access to mainstream media. Women are primarily seen as child-bearers. Health is the lowest priority in a household’s budget.

Poor health facilities, poor health practices, and poor awareness of how simple behaviour changes can make a big difference, means that maternal and child health indicators are poor, and many more people in Bihar die of illnesses like diarrhoea than in the rest of India.

Improving a family’s health is not just a matter of getting information across to a woman who doesn’t yet have it, but also of persuading her, her family, and the community around her to see its value. So shaping demand and practices is a huge challenge.

Bihar is slowly beginning to turn around, with improved governance and economic policies. This change is fertile ground for new directions in social terms. In many ways, the state is drawing lessons from its past, embracing new paradigms, and creating innovations.

This is a useful time at which to learn from health interventions that have and have not worked in the past, and to find better ways to improve people’s lives.

The project started in eight districts of Bihar in 2010, with the objective of scaling across the state by 2015.