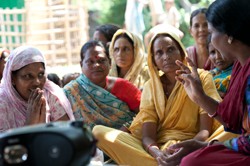 A Listeners' Group in action

Have you ever tried to get a child to wash her hands before eating or stop her from biting her nails? Then you know how hard it is to break an old habit.

Convincing anyone to change their behaviour can be tough.

As part of the Ananya programme, a collaboration between the Bill and Melinda Gates Foundation, the Government of Bihar and other partners, BBC Media Action is tasked with changing behaviour associated with family health in eight of Bihar’s districts, one of India’s poorest states.

What is Shaping Demand and Practices

The project touches the lives of women, their husbands, mothers-in-law, community health workers, and children. It encourages each of these target populations to adopt or modify nine key behaviours—from encouraging woman to deliver in a hospital rather than at home, to getting couples to plan their families.

The project encourages target populations to adopt nine positive health behaviours during pregnancy and early motherhood—from conception through to a child’s second birthday.

This is a challenging task. It’s difficult enough to get people with access to mass media to rethink their health behaviour. Targeting a hugely populous state in which people have very limited mobility, agency and access to mainstream media, is an immense challenge.

To achieve this, BBC Media Action employees a ‘360 degree’ approach, which uses communication in non-traditional ways.

Shaping Demand and Practices is evidence-based and result-oriented. We seek to start discussions on health within communities, build the private sector’s capacity to sustain initiatives, and work with existing community and government systems in innovative and creative ways.

We seek to encourage people to rethink and change their behaviours in ways that can save lives.