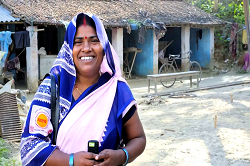 Fieldwork for the study was carried out by conducted by Indian Market Research Bureau between August 2014 and December 2014.

•  To explore the effect of exposure to Mobile             Kunji on key determinants of behaviour change,       such as knowledge, attitudes, self-efficacy and         interpersonal communication among the community members.

•  To attempt to capture and validate the practice of simple doable actions directly related      to Mobile Kunji messages.

The study used a mixed methods design to gather quantitative and qualitative data from a randomly selected sample of the project’s target audience and the Community Health Workers who used Mobile Kunji to communicate with them.

The quantitative component was comprised of a survey among Community Health Workers (CHWs), currently pregnant women and mothers of children 6-11 months old. A sample comprised of 583 FLWs and 3379 women from communities (2423 exposed and 956 unexposed) were surveyed.

Independent review of the analysis and findings was done by Evalueserve: At the recommendation of the Bill and Melida Gates Foundation (BMGF), the donor, all the outputs related to the study including the questionnaire, dataset, sampling sheet, weighing sheet, analysis syntax, analysis outputs and presentation were critically reviewed by independent research analytics agency Evalueserve. The agency provided feedback to BBC Media Action about incorporating explanations and making minor modifications and submitted the final report to BMGF which validated the study processes and results.