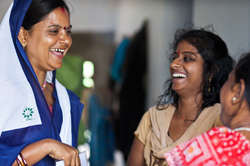 When Champa Devi gave birth at home to a daughter, her mother-in-law fed the infant goat’s milk first, according to ceremonial tradition.

Within a couple of months, Champa Devi began to give the baby rice gruel in addition to her own breast milk, but she was so worried that the baby would choke on it that she diluted it heavily with water.

After a few months the baby became listless, and her weight gain slowed. She was being fed plenty, but was rapidly becoming malnourished.

There are many Champa Devis. Each of them is the story of a failed paradigm.

The challenge is to create stories of success.

But how do you reach millions of families and persuade them to change their traditional practices, when they have little or no access to formal education, mainstream media, or health infrastructure? Much has been attempted, but little has worked.

We know that family health practices change only when the whole community is persuaded to change.

The innovation that responds to this insight is the “360 degree approach”—aiming our communication not just at the childbearing Bihari woman, but also at the people who most influence her health and decisions, such as her husband, mother-in-law, and health worker.

By using available and appropriate platforms—for instance delivering information via mobile phones which are already in people’s hands, or by mobilising communities through existing self-help groups—we use simple, far-reaching, effective forms of communication.

We know that people resist radical change. Therefore, it is much more effective to identify and encourage small, simple, doable actions, for example assembling a delivery kit of regular household items. This, coupled with higher-level norm-changing approaches, such as highlighting the benefits of birth spacing, make a profound difference to health.

So, in the new paradigm, a health worker with Mobile Kunji (Mobile Key) persuades Champa Devi to deliver in a hospital.

Her mother in law agrees because her self-help group has discussed the idea after hearing the radio programme Khirki Mehendiwali (Mehendi Opens a Window).

The hospital staff stresses the importance of giving the baby the mother’s first milk (colostrum) and exclusively breast feeding for six months.

At six months, the Kilkari (Baby’s Gurgle) mobile phone service calls Champa to say that she should start feeding the baby complementary foods.

Ads on television and radio, as well as street theatre troupes remind her that it’s important not to dilute the food too much in order to retain its nutritional value, and that she can feed the baby what she eats, only in a mashed form and without spice or salt.

Before long Champa is celebrating her baby’s second birthday – a happy, laughing, plump little toddler who has weathered the most vulnerable period of her infancy.

That’s how we make stories of success.