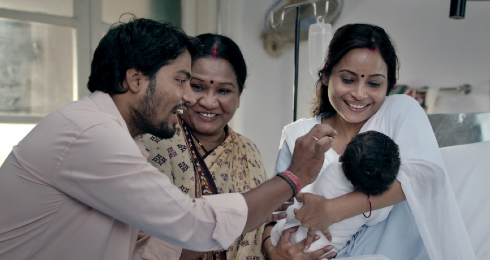 Vaada – a promise to protect the new-born

Data shows that 44% of all neonatal deaths happen in the first 24 hours after birth, making the first day of birth the most crucial for the child’s survival. It has been proven that breastfeeding in the early neo-natal period alone can have the single largest impact on child’s survival and in reducing overall neonatal mortality. But breastfeeding practices are determined by sociocultural factors. For instance, women in Uttar Pradesh are often made to wait for three days before initiating breastfeeding because they are considered “impure” after birth.

The magical first hour after birth

In the advertisement, a Mother-in-law makes a promise to her daughter-in-law and her unborn child. The advert is designed to establish the criticality of first hour post birth as an important window to child survival.

The visual shows the old lady handing over the baby to the mother for breastfeeding, with a voice over highlighting the importance of breastfeeding in the first hour of birth, in which a baby gets immunity and the warmth of the mother’s body. Any delay poses nearly 1.5 times more risk to the infant’s life.

When it comes to childbirth and child-rearing, it is a known fact that the mother-in-law is the key influencer and decision maker in the family. With this in mind, the mother-in-law was positioned as the key protagonist in the advertisement and is shown as someone who understands the importance of breastfeeding within the first hour of birth. She makes a promise not to miss this ‘magical hour’ and is portrayed as a role model for others in the community.

The advertisement builds a sense of urgency around the first one hour of birth – this is the “magical hour” for protecting the child, the “ticking period”.