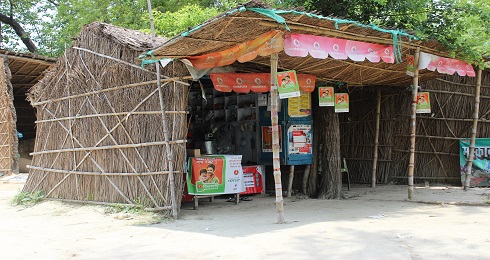 We designed a 360 degree marketing strategy and rolled it out in phases. Since our target audience is spread extensively across rural Bihar, our strategy to promote ‘Kilkari‘ needed to use multiple cost-effective platforms. We achieved this by:

Songs in the streets: how we generated awareness

Rural activation was used to achieve our two primary objectives: generating awareness and tapping the early adopters of the service by visiting towns and villages in eight priority districts. We used ‘Kilkari‘ branded vans to create awareness. They were equipped with audio-visual aids and a ‘Kilkari’ song which was played out aloud in the villages they visited. This attracted huge crowds and generated a large number of queries and requests for more information from audiences.

There were other branding initiatives, such as wall paintings, stenciling, tin plates, posters and stickers in the villages. These ensured a visual connect for the audience even after the completion of the face-to-face activation.

We also staged about 3000 street theatre performances. These were focused primarily on communicating the importance of complementary feeding, but were also used to promote ‘Kilkari‘. Our promoters engaged with the crowd, informed them about ‘Kilkari’ and also helped interested people to subscribe to the service.

Leveraging partnerships with leading mobile operators, we were able to reach out to families in Bihar with promotional messages delivered via USSD and SMS. These tools have proved to be extremely useful as they allowed us to reach huge number of people at a low cost.

We identified community health workers, who are regularly in touch with pregnant women, mothers of children and their families as an effective channel for encouraging and motivating families to subscribe to ‘Kilkari‘.

An incentive programme was devised where every community health worker who helps a family become a loyal ‘Kilkari’ subscriber receives talk time credit on her mobile phone. An extensive face-to-face training programme was carried out to educate community health workers about ‘Kilkari‘, and, to teach them how to promote the service. They were also informed about the incentives they could earn by promoting the service.

Igniting the flame of knowledge

Within six months of the launch of the service, over 60,000 subscription requests were received from the families in Bihar. The ‘awareness’ phase has been completed, with over 1000 villages being exposed to the ‘Kilkari‘ brand via over 2000 van activities and static branding in all the villages visited. The training of the community health workers was completed in February 2014 and they are now beginning to promote ‘Kilkari’ across eight priority districts.

The need for a programme like ‘Kilkari’ is evident in the enthusiastic way that rural families are adopting the service.