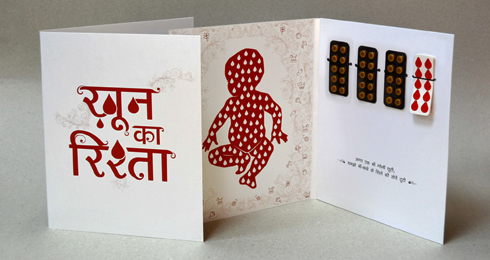 Anemia is directly and indirectly responsible for 40% maternal deaths in India. Two-thirds (67%) of women in Bihar have anemia. One of the most effective ways of combating this, is through consumption of Iron Folic Acid (IFA) tablets, However, only 12 percent mothers consumed IFA for 100 days or more.

Today, where millions of women across the globe are dying due to complications in pregnancy, mere access to health care services is not enough; it requires a major shift in the attitudes and knowledge of individuals and society by adopting healthy behaviours. The solution lies in disrupting existing paradigms by rethinking the problems.

Using the human-centered design process, the Shaping Demand and Practice project created a disruptive communication tool called Khoon Ka Rishta (blood line). The tool presents a unique way of ensuring compliance for an expectant mother – so that she has the complete dose of 180 IFA tablets. For instance, rather than simply telling a pregnant woman that it is important for the health of her baby that she take IFA supplements, the project used the insight of how a mother and her unborn baby are intrinsically linked through a “blood line” that is strengthened through taking IFA.

It vividly demonstrates a mother’s role in the formation of her own baby through a ‘simple doable action’ of taking a pill a day for 180 days. It also establishes the importance of consuming IFA for pregnant women who know little about the benefits for themselves and their unborn babies. It works through a simple, but relatable cultural concept of family and lineage– the ‘bloodline.

How is ‘Khoon ka Rishta’used ?

The Khoon ka Rishta tool has three parts to it – the frontline health worker (FLW) would use first part to explain to women in a group how IFA tablets help creates the bloodline between mother and child, and how missing even one tablet could actually break that line.

The second part of the paper, to be kept by the mother, carried an illustration: the outline of a baby’s body, with teardrop-shaped gaps inside. This also included the entire course of IFA tablets and strips of teardrop-shaped adhesive bindis, to fit the gaps.

As the mother would take a tablet, she would use the red bindi to cover up those gaps in the baby’s body. And as she would complete her course of 180 tablets, she would watch this baby becoming whole.

The third part was a card with a congratulatory message using the same teardrop graphic.

The tool has been evaluated and the results reveal:

The tool has been used in Bihar for a little over a year across 8 districts at VHSNDs sites and it will soon be implemented across the state as the Government of Bihar has committed funds for the scale up.