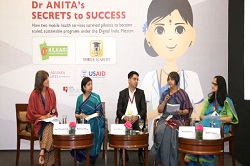 Empowering millions of mothers in India: A story of success and sustainability

Dr Anita is a very busy woman. She provides health information, guidance, and friendship to nearly 10 million families across India – helping save the lives of mothers and new-born babies alike. How does she find the time, you ask?

Dr Anita is the fictional narrator of two of BBC Media Action’s award-winning mobile health services, developed with support from the Bill & Melinda Gates Foundation (BMGF), the US Agency for International Development (USAID), and the Barr Foundation:

1. Kilkari delivers weekly, time-sensitive audio information about reproductive, maternal,        neonatal, and child health (RMNCH) directly to families’ mobile phones from the 4th              month of pregnancy until the child is a year old.

BBC Media Action – in collaboration with state government and with support from BMGF – first launched Kilkari and Mobile Academy in Bihar in 2012-2013. The Government of India adopted the services in January 2016, kicking off the national scale-up as part of the Digital India Mission. As of February 2019:

“For the millions of poor people in India who can’t read and don’t own a television or radio, the mobile phone – even in its most basic form – has huge transformative potential, connecting people across distances and providing access to life-changing content.”

Sustainable development: handing the services over to the government

BBC Media Action has collaborated with the Ministry of Health and Family Welfare to scale and transition responsibility for the services to the government over the last three years. This has been supported by BMGF, USAID, and the Barr Foundation. The Indian government has covered all call costs since the scale up began, making the service free to millions of families and hundreds of thousands of health care workers.

Support for the programme from these donors has now come to an end, and as of 31st March 2019, BBC Media Action will complete the planned transition of responsibility for Kilkari and Mobile Academy to the Ministry of Health and its partners who will continue its vital work into the future.

“We are thrilled that the Ministry of Health and Family Welfare has decided to continue scaling Kilkari and Mobile Academy beyond our exit from the program. In the digital development community, where sustainability is often the illusive pot of gold at the end of the rainbow, this feels like a massive achievement.” said Priyanka Dutt, Country Director, BBC Media Action.

BBC Media Action is the BBC’s international development charity. We use the power of media and communication to reduce global poverty and transform people’s lives for the better.

Find out more about our work around the world: www.bbcmediaaction.org