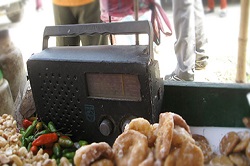 The mobile landscaping study carried out revealed crucial information on mobile usage and behaviour in Bihar; confirming that mobile phone penetration presented an unprecedented opportunity to directly reach families – particularly those living in media dark rural areas – with life-saving health information. For example, the data showed that, in rural areas, the number of people that had access to mobile phones was higher than that of those who owned them. it also showed that mobile phone ownership was higher among women of child bearing age.

In rural Bihar, while only 68 per cent of men and 32 per cent of women owned their own mobile phone, more than 80 per cent of both sexes had access to a shared household mobile phone. The study also revealed that almost all frontline health workers (FLWs) had access to a mobile phone, although the majority of these phones were very basic; often second-hand handsets, with some even held together by string. Only 9% of FLWs had ever sent a text message, suggesting that anything we did on mobile phones would have to be audio-based and accessible for users. Based on these findings, the challenge ahead was to innovate with appropriate technology – the basic mobile devices and functionality that people were already using.