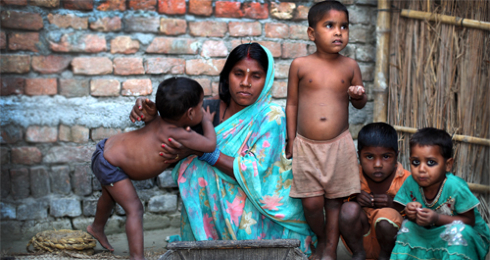 Out of the social system

Pasraha is a tiny village situated between a railway station and a busy highway running east from the district headquarters of Khagaria. On the periphery of the village is a cluster of huts that belong to rag pickers, the lowest on the social ladder. Though this village is situated a stone’s throw from the brightly lit highway, Pasraha is not yet lit by electricity.

On a bitter winter afternoon in the village, Rajni Devi is sharing the warmth of a small fire with five of her children. The eldest daughter, all of twelve, is out picking up bits of plastic along the highway. At age 28, Rajni is mother to six. In Pasraha, this is the norm, not the exception to the rule. On days when families can find work, the average daily earning is just Rs 150-400 ($3-8) per household.

Rajni Devi doesn’t know about family planning except for ‘the operation’ (local language for tubal ligation). But she’s afraid she would have to rest for weeks after the procedure. Who would take care of her children and her home during those weeks? She has also heard about condoms (locally called ‘phukna’, or balloon), but after much coaxing, she shyly reveals that her husband doesn’t want to use them. Does she know about any other methods of contraception? – “No, we don’t talk about these things here”, she says.

The issue is not just one of lack of information or even access. There are several other barriers that are far more difficult to overcome. Ask Rajni Devi when she last spoke to her husband about family planning and she’ll cover her face with one end of her sari and tell you that men and women don’t discuss these things here.

She’ll also tell you that elders in her community will disapprove of this talk of family planning; how will she provide enough male heirs to carry the family name forward if she spends her youthful, reproductive years on contraception? When several generations in her community have delivered children one after another, why this talk of spacing and limiting? What is the benefit? Best to have children while you can, she’ll tell you.