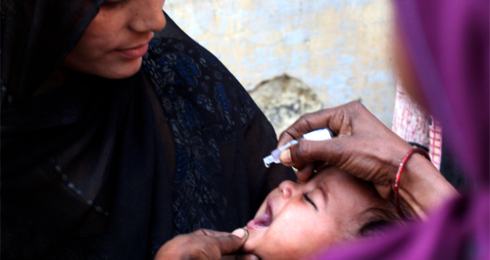 Shot at a safer life

Of all the health tools used in Bihar, the one everyone seems aware of is the ‘sui’ – Hindi for needle or injection. People’s opinions about immunisation may vary from fear and apprehension to acceptance and its identification as the most potent form of prevention. Medical officers attest that ranks from the former have been shifting to the latter over the years. Part of the credit goes to the thousands of ASHAs (Accredited Social Health Activists) and Anganwadi workers who have spread awareness about the need.

You would expect this growing awareness to ensure a successful immunisation drive, much of which entails needle shots. But there’s more to it than what’s seen at first.

Here is the context: There are 13 doses prescribed for a newborn to guard against seven diseases – Tuberculosis, Polio, Hepatitis B, Diphtheria, Influenza, Tetanus and Measles. The incidence of Tuberculosis and Measles in Bihar is higher than the national average. India, once one of the worst Polio-affected countries in the world, has fought off the virus and needs to remain vigilant against a comeback.

Now here is Bihar’s reality: The rate of immunisation in Bihar is relatively high. Eight in 10 children have received the Polio and BCG vaccines. But the rate drops-off to about five in ten when one sees the data for Measles, Diphtheria, Influenza and Tetanus.

In Soriyari-Chinahi, Jai Kishore Rishi Dev, 28, and Chaniya Devi, 25, have three children. When the second child was born, they were given a colourful folded card to remind them of the immunisation doses completed and next dates for the ones yet to be given. They carefully tucked away the chart on a shelf in their one-room hut, pulling it out every once in a while when they remembered to do so. While the chart does serve as a reminder, the challenge is not only one of remembering when the next immunisation day is, but of convincing families of the importance of completing every immunisation cycle; and of the ill effects of incomplete immunisation.

Unfortunately, the grim reality is that less than half the children in Bihar get all thirteen prescribed shots. The advantage gained by the acceptance and awareness of the ‘sui’ does not always translate to full immunisation.