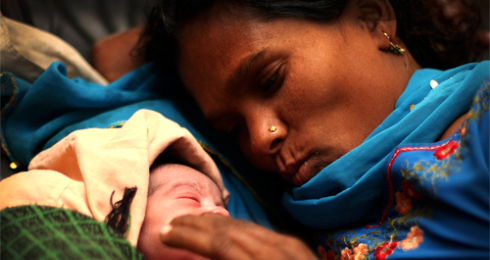 Life in Soriyari-Chinahi is hard. Almost all families in this small village situated about 25 km outside the district headquarters in Saharsa live below the poverty line. Most families earn by working in the fields nearby; some travel thousands of kilometres to Delhi, Haryana and Punjab to earn daily wages for a few months. Electricity lines have been laid  to the village but there is no power supply yet. The broken road snaking into the village is, actually, a large clay dyke separating agricultural fields and it degenerates into a muddy mess during the monsoons.

In Soriyari-Chinahi, as is the case in many other villages across Bihar and India, at the moment of birth, babies are considered ‘dirty’. The mother and baby are first wiped with an old cloth, as no one wants to ‘waste’ a new cloth. Then, if the village midwife Samtulya Devi has her way, the child is bathed in warm water, though doctors advise just wiping a baby dry after birth.

“I ask them to keep a new blade ready,” says Samtulya Devi. “But sometimes we just have to wash a used blade and cut the umbilical cord with it.”

Colostrum, the mother’s first milk, is considered unsuitable for newborns here. This belief means the milk that’s proven to be high in immune factors and protein is thrown away. The infant is first fed cow’s milk or sugar water. Mother’s milk is given only later, when her milk becomes ‘normal’.

The village’s Anganwadi worker, Kavita Kumari, says, “I keep telling them what to do. I also show them the informative literature I get. But they do their own thing.” If they have a question, they go to Samtulya Devi, who is Kavita Kumari’s mother’s age and therefore considered more knowledgeable.