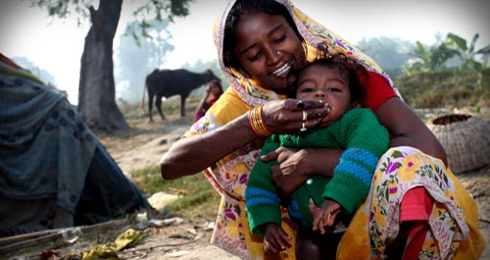 When is it time for the first rice?

Nauki Devi has a one month-old son, her fifth. The one thing worrying her and her husband Girish Sharma, a migrant labourer, the most is nutrition for their children. The husband brings a handful of yellow lentils from his hut and says, “How shall we ensure nourishment for our children with this?”

But even with such concern for nutrition, and the experience of bringing up four children already, the Sharmas of Dhabauli village are not aware of some basic facts. Nauki has been breastfeeding each of her children till the age of a year and a half. But she hasn’t fed any of them any solid food till that age. “We give some cow’s milk along with the breast milk,” says Girish. “That’s the most they can take when they are so young.”

It’s a widely held belief in Bihar, and indeed across India, that infants below the age of two cannot digest solid food. The Sharma’s may be observing it to an extreme, but several other parents will tell you that they feed only the ‘water of lentils’ from six to twelve months. A BBC Media Action survey conducted in eight districts of Bihar shows that an alarming nine out of ten mothers don’t know the correct age of initiating complementary feeding.

This is possibly the most preventable cause for malnutrition and a major cause of infant mortality in rural India. It’s a belief that ASHAs (Accredited Social Health Activists) and Anganwadi workers, the village-level healthcare advocates, have struggled to shake off despite their efforts. “It’s very difficult to deal with the fears of parents; how can we convince them to initiate complementary feeding at six months when for generations they’ve done otherwise?”