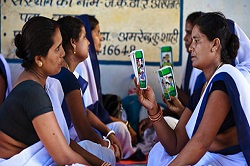 Supportive government partnerships have been critical to the success of communication outputs developed under the Shaping Demand and Practices (SDP) project. The state government of Bihar extended its own resources to ensure extensive reach for the communication activities and outputs. It also encouraged frontline health workers (FLWs) to support all aspects of SDP; paid for rounds of rural activation; took over the lead on FLW communication training, scaled up Mobile Kunji, and rolled out interpersonal communication outputs across the state.

Within the SDP project, a structured process was used to co-develop outputs with government counterparts from the very beginning. This involved drawing up creative briefs for each output, followed by production, pre-testing and redesign if necessary. This approach provided for opportunities for interaction and collaboration with government at many stages. Moreover, rather than only relying on national or international technical guidelines, state government input was always incorporated in the technical briefs underpinning output design. Partnering with the government from the inception had not only allowed us to scale our communication solutions by leveraging government funds; but also encouraged government ownership of the outputs, which was critical for longer term sustainability.

Government partnerships and donor investments allowed us to scale content not just in Bihar, but to several other states. For example, Mobile Kunji was scaled up in Odisha, with support from the United Kingdom’s Department for International Development (DFID), and to Uttar Pradesh, with funding from the Bill & Melinda Gates Foundation. DFID support, along with robust relationships with the Department of Education allowed us to introduce the radio programme Khirki Mehendiwali to hundreds of young girls in over 1,700 Kasturba Gandhi Balika Vidyalayas (state-run residential schools for girls from marginalised groups) in Madhya Pradesh.

Public sector partnerships, with state and national government, facilitated the inter-operability of project outputs.  In the case of Kilkari and Mobile Academy, proven integration with the government’s national databases that track and register most pregnancies and births in India has enabled the services to reach scale with almost no marketing investment. Partnering firstly with state government and then with national government, from inception, to going live, to operations at scale, ensured government ownership from the start and enabled the services to be completely free of cost to subscribers.  Kilkari remains the only maternal messaging service in the world where all call costs are paid for by the government, making the service free to millions of families.

Over the last eight years we successfully leveraged millions of dollars of funds from state governments, as well as from the Ministry of Health and Family Welfare (MoHFW) to scale our communication solutions across Bihar and other states in India. Government departments in Bihar invested/committed to spend INR 116 million ($ 1.65 million) covering much of the costs associated with running Mobile Kunji and Academy.