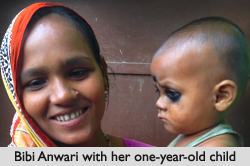 ‘Petpuja’ – our rural marketing campaign on complementary feeding – was in full swing. I was visiting a village called Nimaul to monitor progress.

Fifty kilometres away from the district headquarter of Katihar in the state of Bihar, Nimaul is populous, flood-prone and visibly poor.

On that sunny November morning, it was a great to see more than 200 people gathered around one of our decorated vans, watching the ‘Petpuja’ film, laughing, clapping, whistling and enthusiastically engaging with the quiz contest at the end of the show.

As the roadshow came to an end, I was keen to find out what the audience thought of it.

Scanning the crowd, I saw a woman proudly carrying a brand new steel bowl in one hand and a less than healthy child in the other.

I was sure that she had won the bowl in the quiz contest. I quickly asked Farhat Nawaz, one of the village’s community health workers, to strike-up a conversation with the woman. Her name was Bibi Anwari. Initially hesitant, she soon began to open up.

Like many men in the village, her husband Nazrul works as a labourer in Delhi. He somehow manages to send home enough money to feed Bibi Anwari and their four children. Having won something useful and free for her household, Anwari was brimming with pride.

“As soon as they question was asked, I replied that proper nutrition keeps the child healthy,” she said.

But, as we talked more, Anwari revealed, “although I know the correct answer, I have only been giving breast milk to my child and a biscuit or two, once in a while.” Was there a sense of embarrassment or guilt in her voice? I wasn’t sure. Anwari’s eyes were fixed on the distant horizon.

“One-year old by now,” she replied. A brief pause followed before she continued, “But, sir, today I have made up my mind. Reaching home, the first thing I’ll do is to perform ‘Petpuja’ for her.”

The second part of the campaign was now about to start. Anwari too had to go back home and prepare lunch for her family. With typical rural hospitality, she insisted that we visit her house before leaving the village. We agreed to come later that afternoon.

I accompanied the van and its team of interpersonal communication promoters on the next phase of the campaign in the village. Although it went well, Anwari Bibi’s words refused to leave my head.

Over the years I have learned that health behaviours don’t change in a day. What is shaped over years by our knowledge, attitudes, belief and social norms, takes time to change.

Although Anwari said she’d start feeding her baby solid food right away, she might not do it. She might have said it just to impress me. There are millions of Anwari’s across Bihar – and I don’t know how many more campaigns like this it will take to persuade mothers to give solid food to their children as soon as they’re six months old.

Farhat sensed what was going on inside my head. While passing through the village, she mentioned that Anwari’s house was nearby and asked if I would like to pay a visit. Yes, I promptly said.

When we arrived, Anwari hurriedly came out with a broad smile on her face. Entering the house, I discovered her one-year old child, Ashanoor, curiously staring at us from a tattered wooden cradle. The steel bowl was by the baby’s side – filled with what seemed to be mashed potato and rice.

“After coming back home, I started giving her solid food right away,” Anwari shyly broke the silence, “there wasn’t much. All I cooked was rice, daal and potato. I took a bit of all of it in this bowl and just made a mash.”

I was groping for words. A delighted Farhat pointed out that Anwari also made use of the wooden cradle while feeding her baby, just as was shown in the ‘Petpuja’ film.

Well, it wasn’t exactly like the film <watch the film here>, but I realised that the images she’d seen in the roadshow had stuck in her mind, as much as the messages had. Audio-visual content has such power!

Anwari doesn’t have a TV at her home. Nor do her neighbours. That’s why our rural marketing campaigns show films from village to village. Anwari has shown the difference it can make.

Ashok has been working at BBC Media Action India since December’2011 a...