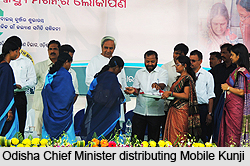 At the launch of Mobile Kunji and Mobile Academy in Odisha, I revisited the question that had been on my mind through the six years I have worked in the development sector: What are the key ingredients of a compelling conversation, one that can lead to active change?

So what are these ingredients? A starting point could perhaps be a question that makes one ponder; followed by clearly stated points for discussion; ideally, with some visual representation or reference to help add clarity to the conversation. But could all these different ingredients add up to create a conversation compelling enough to bring about change?

When I saw 30 Community Health Workers happily receive their Mobile Kunjis from the Chief Minister of Odisha, I had an epiphany. The answer was in these mHealth services that had seen the light of day two years ago in Bihar.

Mobile Kunji is a a combination of a printed deck of laminated cards on a steel ring and a voice-based mobile service. The conversation starter, illustration, some bullet points, and, a couplet are on the cards; while Dr Anita’s recorded voice comes through a mobile phone.

Delivering multimedia content through a basic mobile phone, without needing any expensive hardware, Mobile Kunji functions as a job aid for Community Health Workers (CHWs) that starts a conversation aimed at bringing about change.

Mobile Academy is an IVR (Interactive Voice Response) based learning aid designed to train the CHW and equips her with both technical information on family health behaviours and tips for effective communication. 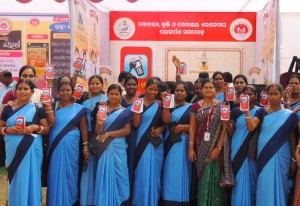 ASHAs in Odisha with their Mobile Kunjis

These two innovations have generated a lot of interest locally as well as globally. There has been a lot of excitement among both CHWs and communities in Bihar. Early in 2013, we started planning to launch them in Odisha, one of the programme states of the DFID funded Global Grant project.

In many ways, our journey in Odisha marked a reinvention of sorts.

What were the key challenges? Customising the content for the state; getting it it right in another language – Odiya; negotiating with the state government for the right kind of system level support for rolling out these services.

A lot of midnight oil was burnt. Intense debates on content ensued. Different nuances of the Odiya language were studied so that the content would be absolutely authentic. Implementation strategies for training and the roll out were done and redone.
This resulted in some new and revised content – new topics like malaria and diarrhoea were introduced. A partnership with the Government of Odisha ensued to conduct face-to-face training of CHWs, where the entire cost of training would be borne by the Government. These services were to be made available to 58,000 health workers across 30 districts in the state. .

The biggest moment in all this was when the Mission Director, National Health Mission, Odisha announced that the government would bear all call costs for both the mobile services.

This meant that not only were both Mobile Academy and Mobile Kunji being rolled out through the largest public sector telecom network operator in Odisha, BSNL, but also that the CHWs would not have to pay a penny from their pocket.

As Mobile Kunji and Mobile Academy cross the Bihar borders into Odisha, we hope they can enable CHWs to have compelling conversations. As Bihar has shown, the paradigm of inter-personal communication can be changed through these two innovations. They have certainly shown the way for scale, sustainability and standardised messaging.

Ritika has been working at BBC Media Action India office since June 2011...