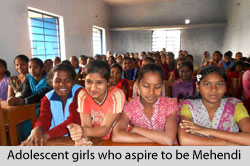 Last weekend, I was with 64 of my colleagues attending the Shaping Demand and Practices retreat. We looked back on the last three years of this enormous and complex project. We took stock of the highs and lows, the successes and challenges. Lots of people recounted their experiences and in the evening when we were sitting around trying to sing a song or two, I thought back on the days before I joined BBC Media Action to work in Bihar, How every time I called I would hear this beautiful song – how the melody and the words of the signature tune of ‘Khirki Mehendiwali‘ stayed in my head long after the calls. Little did I know then that I would be working on the eponymous radio show and that it would lead me to one of my most memorable experiences on the project!

When I joined the project, one of my first trips to Bihar took me to a Kasturba Gandhi Balika Vidyalaya (KGBV). The Government of India runs KGBVs for adolescent girls (11-14 years) from marginalised communities. I learned that our radio show ‘Khirki Mehendiwali’ (in its reversioned avataar) is being played at KGVBs in four districts – East Champaran, West Champaran, Patna and Samastipur. This initiative had started at the behest of the District Magistrate of West Champaran and had then expanded to the other three districts. So I went to the KGBV School in Maner in Patna district. And it was quite a revelation.

I had wondered how Khirki Mehendiwali would be relevant to girls in this age group! After all, the show covered all the important aspects of maternal and child health. But my doubts were dispelled by Dimple Kumari, special educator at KGBV Maner. She gave me a warm welcome and said, “The messages are coming at just about the right time as most of these girls get married at a very early age. It would have been very difficult for them to access such information before marriage, so at least, while in school, they are learning and talking about all this in an interesting way. Most girls, in fact, discuss what they have learnt through ‘Khirki Mehendiwali’, from Mehendi and Dr Anita with friends and family when they go back home.” I joined the dots in my head and understood why including the KGBV groups in the project strategy made such good sense! It was deeply satisfying to know that the content was reaching audiences far beyond the classroom. 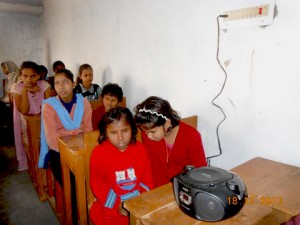 The school environment was buzzing. This KGBV group included 25 visually challenged girls. I was amazed to see the confidence and maturity in all the girls. Before playing, I asked them about the name of the show. “Khirki Mehendiwali” was the hearty chorus. Some of the girls even sang along when the episode started with its signature tune. During the show, I sensed that the visually challenged girls were taking a keen interest in the content. Pooja Kumari (a visually challenged student) remarked, “As the name suggests, the show opens the window to our hearts.” Chotti Kumari (also visually challenged) said, “The radio class makes us feel included as this is the only one where we sit with the other girls. In the radio class, we learn just like any other girl in the school.” 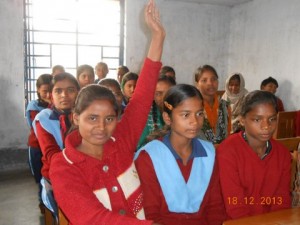 When I asked them to describe the key messages of that episode, a hand went up. Anjali Kumari summed it up really well and when I appreciated her, she smiled and revealed that her mother was an ASHA worker and used Mobile Kunji when she made her home visits. So Dr Anita was a familiar figure even before Anjali heard the first episode of Khirki Mehendiwali. There I was, new to the project, but I could see how our 360 degree approach works in the field. How what is discussed in meetings and shown on power-points actually happens amongst our audiences! I felt quite overwhelmed.

As I was leaving the classroom I asked how many girls would like to be like ‘Mehendi‘ – all hands went up instantly! Chandni Kumari, a student said, “Mehendi is from a poor family just like us and has overcome a lot of struggles in life. We would also like to be independent like her and give messages on the radio.” I felt empowered by her ambition and confidence. As I sat next to my SDP team mates last weekend and heard their stories, I could see how most of our lives have been enriched and changed in the course of working on this project.

Antara is working as a Project Officer in the Shaping Demands and Practi...