Stories of the health frontline, Bihar 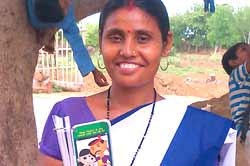 The World Health Worker Week (April 7 – 11) aims to support, appreciate and raise awareness about the important role of Community Health Workers (CHW). I want to celebrate this week by sharing my stories about some of the CHWs we have been working with in Bihar – their challenges, their triumphs, their highs and their lows!

Adversity brings out your best¹

Such is the case of Mira Kumari, an Anganwadi Worker of Barwa Village in Khagaria district. Mira has been trained in inter-personal communication and the use of our mHealth Services – Mobile Academy and Mobile Kunji. When super cyclone Phailin hit Odisha in October 2013, parts of Bihar were affected as well. Mira’s village Barwa in Khagaria was cut off from the Primary Health Centre. Mira realised that Salma’s date of delivery was nearing and counselled her on how to prepare for a safe delivery at home. Sure enough, the delivery had to happen at home and Dr Anita`s advice from Mobile Kunji, delivered by Mira came in really handy and Salma had a safe delivery.

Village Barwa now adores Mira. She feels empowered and important in the community.

But success didn’t come easy. Mira had been unable to motivate Salma’s family to go in for an institutional delivery during her first pregnancy. Salma faced many problems and her child caught pneumonia. But this time around Mira, armed with her freshly acquired IPC training and her brand new Mobile Kunji, managed to counsel Salma and her family to ensure a safe delivery at home and its follow up. She is confident that had it not been for Phailin, she would have been able to persuade Salma to go in for an institutional delivery.

Poonam is a diligent ASHA worker from Bihta block in Patna district. Her work has been recognised by the block level government officials. But she used to feel uncomfortable counselling families on family planning, because she has three children of her own and her husband wants more sons, not an unusual situation in Bihar. Her attempts to discuss family planning have been repeatedly rebuffed by her husband.

Poonam then attended our training and learned the techniques of IPC using Mobile Kunji. She tried the Kunji on her husband, taking him through the family planning section. This time he listened, the cards interested him and he was impressed by Dr Anita’s message. But he was still unwilling to take any action.

But Poonam kept at it, without losing hope, showing her husband the Kunji cards and playing him Dr Anita’s messages. Finally she was able to initiate a discussion with him and informed him of the family planning options available.

A few days later, much to her astonishment, she saw her husband reading the family planning cards again. Within a week, her husband agreed that Dr Anita’s advice had merit and that he was thinking of getting himself sterilized. Poonam was overjoyed. Finally her efforts had paid off. Poonam’s husband got himself sterilized a week later. Poonam attributes this change of heart to her newly learnt skills, to Mobile Kunji and Dr Anita. She now counsels other women in her catchment area with confidence and cites her own example proudly.

Mithilesh Singh, an ASHA worker from Chanpatiya block of West Champaran district feels that many of the maternal and child health problems in her catchment area are due to people having too many babies.

She has always tried explaining the need for spacing and limiting to families but she felt it was mostly not heard. But once she received our IPC training and got her Mobile Kunji she decided things had to change. She felt much more confident and made use of the Mobile Kunji cards and Dr Anita’s messages when she spoke to couples about family planning, when she made her home visits. She also used it a lot in the Mahadalit areas.

Since then, in just one year, she has got 85 men and women sterilized and helped ten women adopt the IUD. She feels Mobile Kunji has helped her in achieving this.

Keeping the infants healthy4
Poonam Kumari, an Anganwadi Worker from village Kasha Bariyahi in Begusarai district uses Mobile Kunji to counsel families on complementary feeding. Poonam has found that Mobile Kunji helps her change the minds of parents and grandmothers, who hesitate to initiate complementary feeding when their babies become six months old. The hurdle, Poonam says, is tradition: “Earlier, families never gave food (to infants). They have a saying, ‘if the infant eats food, the food will come out of the stomach.’ So they would never feed at six months, but now they have started. When Doctor Anita gives advice through the mobile, the mother hears and believes.”

This is evident from the Ananya program monitoring data, which shows that children between six and 11 months receiving cereal-based, semi-solid food in the eight Ananya early innovation districts have more than doubled – 30% to 69% in just 18 months!

There must be many such stories from all over Bihar; Tales of courage, determination, conviction and a never-say-die spirit. But also these women exemplify that change has to begin with them. They have changed the way they are now counselling families and are celebrating their own successes. Three cheers for them!

I have to thank a number of people who collected shared these stories with me:

Wasim Ahmed is a Senior Studio Manager at BBC Media Action, India since ...