The key to my baby’s health 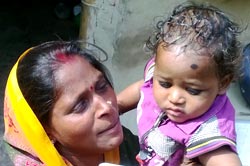 Instead, she wanted to take me to her village to meet one of the families there. Apparently, there was a pleasant surprise in store for us. And, it wouldn’t take longer than half an hour. I couldn’t refuse and went along.

Village Rani Sakarpura wasn’t far. Along with the Community Coordinator and our block-level staff, we drove for some 20 minutes. Parking our car under a tree, where a brick road from the village met the main metalled road, we walked for about three minutes and stopped in front of a nondescript mud house with a thatched roof.

As Rangina called out, a young woman, about 26-30 years old, came out holding a baby in her arms and a three-year-old in tow. Ahiliya Devi was her name, by now a mother of four kids.

Seeing us, she pulled her veil so low over her face that the flash of her wide smile was hardly visible. Exchanging greetings, we sat on a charpoy in the front yard. Another woman, a little older, brought us water, even as her playful toddler kept crawling all around.

Ahiliya had been married off when she was barely 13. Following the custom of the region, she came to live with her husband in the third year of the marriage.

She now lived with her four children. Babloo, her husband was a migrant labourer in Delhi. “He comes home only during the festivals,” Ahiliya told us. His elder sister, the woman who had brought us water, lived with them and was Ahiliya’s guardian. 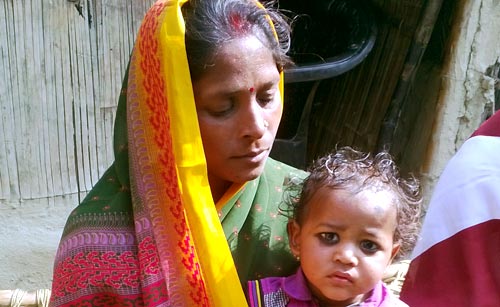 Rangina started telling us how Ahiliya used to believe that all kids should be exclusively breastfed until two years of age, but Ahiliya butted in with her own account: how her relatives and neighbours warned her against feeding anything solid to the baby till two years of age. In fact, they said solid food would make a child ill.

But this time, Ahiliya, paying heed to Rangina’s advice, had already started feeding mashed food to her 10-month-old from six months onward.

I probed her a bit. What made her change her mind? Why did she shed her previous misconceptions?

A clearly delighted Rangina, chipped in, “Earlier we tried counselling on our own. But, nobody believed us; we just couldn’t persuade them to do the right thing! Now, I show them the Mobile Kunji cards, read out the messages and play the voice of Doctor Anita. It’s much easier.”

“But, how did you convince your in-laws and neighbours this time?” I asked Ahiliya again.

By now several neighbours had gathered at Ahiliya’s front yard. She giggled pointing at a woman in the crowd, “Rohit’s wife has also started giving supplementary food to her 6-month old.” Laughter spread among the men and women around.

“It’s equally important to counsel the elder women in the family, because in most households they call the shots! So not only do we talk to them as well, we also follow up regularly just as we have been trained,” Rangina told me on the side.

In the car, Rangina continued to tell us how Mobile Kunji has changed her status in the village. She informed me with a proud smile, “Men are more respectful about the advice I now give to their wives and mothers!”

No wonder the community health workers are demanding more free minutes on Mobile Kunji at every meeting, I thought to myself!

² An Anganwadi Worker is a lady selected from the local community, is a community based frontline honorary worker of the ICDS Programme. She is also an agent of social change, mobilizing community support for better care of young children, girls and women (more: http://bit.ly/1mAXJ8H).

Nasiruddin is a Regional Coordinator in BBC Media Action India. He leads...