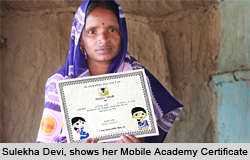 We were delighted at the lunch table when a colleague from Bihar narrated this story.

There was a Community Health Worker (CHW), who was reluctant to show up at a Mobile Academy certificate distribution ceremony, because it conflicted with a wedding celebration at her village. But, when she heard that the District Magistrate would be handing out the certificates, she changed her mind!

Clearly, for someone who hadn’t been able to study beyond eighth standard, to receive an accolade from a highly placed government Official was a once in a lifetime opportunity.

The story stuck in my mind. It kept popping up again and again, each time arousing my curiosity to a new level.

Mobile Academy and Kunji have already received much praise from different quarters. The take up and usage statistics that we upload to the website every month show their impressive popularity among Community Health Workers. We have been told by Community Health Workers how these tools have helped them in their work, making them effective. You can read some of the stories here.

But I was still curious about was how Mobile Kunji and Academy have influenced their lives, at work and at home. What has changed that a health worker would miss the wedding of a dear family member for a work related meeting? How have the mhealth (mobile health) tools increased their motivation and confidence? And do they perceive any change in their professional status?

I was keen to hear the answers from the Community Health Workers themselves – in their own words.

In quest of answers 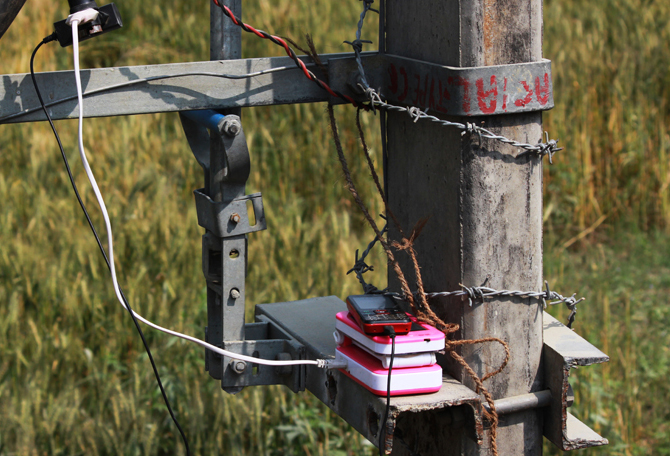 Phones being charged by tapping electricity

The quest took me to Saharsa, one of the priority districts in the Shaping Demand and Practices project. I spent four days talking to Community Health Workers, their supervisors in the government health system and the families they serve. What I gathered was enlightening.

Saharsa is not an affluent region. Stretches of corn and wheat fields punctuate the sprawling banks of the formidable river Koshi. But floods are a yearly phenomenon. Maternal mortality rates are high. Electricity is in such short supply that I saw stacks of mobiles being charged by illegally tapping wires dangling from the odd electricity pole. There is paucity of tarmac roads and public transport. Many of the ASHAs and Anganwadi Workers we met at a Health Sub-centre¹ meeting told us how they walked for miles to reach it.

In such a context, one of the benefits of Mobile Academy was that anyone CHW could take the course, sitting at home, via her mobile, reflected Sulekha Devi, an ASHA from the village of Salkhua. To make her point, she recounted the scary boat rides that she has had to take to attend training programmes in the past.

A mother of four children at 35, Sulekha has a joint family to look after, as well as having to prepare for her matriculation exam this year. She completed the Mobile Academy training course in three to four days flat with full marks. “How did you find the time?” I asked. “I used to dial up the number whenever there was a respite in between errands,” she said.

Manju Mehta, a 44 year-old Anganwadi Worker in the neighbouring hamlet, also scored full marks. What she enjoyed most was the quiz at the end of each chapter. “I had never played anything like that. They would start by saying, ‘Di–di, wrap your sari tightly and get ready,’” she almost sang out in imitation. 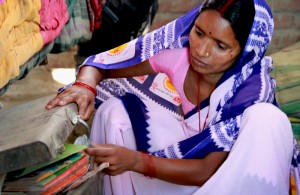 Suleka tucks her certificate into a metal safe

“My aunt-in-law used to pray to God every day, so that I could secure pass marks; but I found it easy,” revealed a delighted Sulekha, while carefully tucking her prized Mobile Academy certificate into a metal safe.

“Who did you show your certificate to first?” I asked. To her husband, then to her father-in-law, who hopes that someday it will help her climb further up the professional ladder. She then showed it to her neighbours – recollects Sulekha, who quietly harbours an aspiration to become an ‘ASHA Facilitator’² someday.

There is unanimity among the health workers that Mobile Academy has refreshed their knowledge. “Still, we sometimes tend to forget things during a family visit,” confides Pinky Kumari, pointing at her Mobile Kunji, “but now all the points I need to make are right here.”

Public health in Bihar hinges largely on the Community Health Workers. Technology has brought about convenience and enabled support on demand.

How has it reflected on their performance?

Has anything noticeably changed? “Earlier, when they struggled to answer the questions from the families they served, they used to call me or an ANM³ – often at times when we were busy,” says Mr. Sanjeev Kumar Singh, the Block Community Mobilisation Officer at the Salkhua Primary Health Centre (PHC), “now they dial up the numbers on Mobile Kunji.”

“Our workload has nearly halved,” confirmed all four ANMs at the Salkhua PHC, who supervised the Community Health Workers we talked to. “Before, they used to call us all the time with questions, now-a-days they feel confident to handle it all themselves. Also, they easily persuade the families to attend the routine immunization sessions with the help of Mobile Kunji.”

“Their [Community Health Workers’] motivation seems to have increased, and the progress in their performance is visible,” agrees Dr. Narendra Chowdhury, the Medical Officer In Charge of Salkhua PHC.

My curiosity is yet to be sated.

What do the families served by the Community Health Workers think? 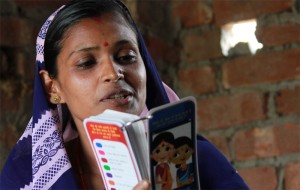 “People, earlier, might even say to me – we don’t believe you; you are doing this just to earn money,” says Anganwadi Worker Manju Mehta, “but, now when I visit families along with my Mobile Kunji, they pull out chairs, invite me to sit, and gather around me.”

Madhumala Devi, an ASHA at village Mahadev Matha, says, “the recorded voice of Doctor Anita that I play out on my mobile has won their trust,” recounting how a reluctant woman in her village agreed to take Zinc tablets after listening to Mobile Kunji. “Now-a-days, wherever she goes, even if it is to the local market, people come to her and ask for health advice,” proudly says her brother-in-law, who is a homoeopathy doctor in the village.

Madhumala wasn’t alone. Each of the Community Health Workers seemed to enjoy their newfound status – be it in their own village or in the health system.

The previous night, Madhumala had accompanied a woman in labour from her village to the Salkhua PHC and came back just half an hour before we visited her. Yet, there wasn’t a sign of fatigue on her face. “How do you manage all this along with your household chores?” I couldn’t help asking. “When I see that the women in my village are becoming more informed, and I’m being able to do good for my village – this is my biggest source of inspiration,” replied a diminutive Madhumala, as her chin went up a notch.

Sulekha’s husband often tells her that they have enough money and she doesn’t need to slog so much. But she fights back, saying what she does for the children of her village is only what she does for her own children.

In Saharsa, where infant mortality rate is 62 in every 1000 live births, Sulekhas and Madhumalas are soldiering on against a battalion of odds. So are their colleagues in the rest of Bihar.

But the enhanced recognition and support from the health system and our mobile services together have given them a real confidence boost. Don’t you agree, with so much of grit and passion, they can do nothing but win?

² An ASHA Facilitator is an ASHA who supports and facilitates a group 19 other ASHAs from a cluster of neighbouring villages.